Your questions - Our answers

Do you have questions about the assembly or installation of one of our products or do you have general questions?

Here you will find answers to the most frequently asked questions.

BBC Cellpack's polyurethane-based sealing compounds are susceptible to petrol, which can affect their properties.

Are there any minimum distances that have to be kept when working with cast resin or gel systems?

To create a safe electrical connection, a minimum distance of 5 mm is compulsory for low voltage (up to 1 kV) between the terminals / cores and plastic shell and/or housing of the branch box. This 5 mm distance also applies to gaps between individual non-insulated connectors. Individual measurement sin the BBC Cellpack assembly instructions may vary according to product.

Can a cast resin joint be cast when live?

The joint can be used straight after casting and/or when live. The relevant provisions “Working with live parts” must be complied with.

Can a polyurethane 2-component cast resin be used after the best-before date?

This generally does not prove a problem as long as the housing has been sealed when casting and/or the cat resin cannot escape after the casting until it has hardened.

Can three cable ends be connected?

Straight-through joints are designed for connecting two touching cables. Branch joints, on the other hand, are for a main conductor (that is not cut) and output cable. It is difficult to join all three cable ends in one joint as the inside of the casing is too small and special connectors are required. BBC Cellpack also did not design these joints for this application area. It is recommended to use the following constellation for creating a reliable and safe connection:

How can a flat cable (e.g. pump connection cable) be connected with a “normal” cable?

A cast resin joint can generally be used for this if the minimum distances are complied with. It is a little more difficult, but generally possible, to seal the flat cable into the round infeed of the shell. Heat shrinkable and gel cable joints are less suitable for this job due to the flat cable.

How do I dispose of excess cast resin?

Unused cast resin hardens in the bag. Once fully hardened and as long as components A and B have been fully mixed, it can be simply discarded with the residual waste.

How is the BBC Cellpack cast resin used?

STEP 1: Ideally, the bag has a temperature of around 20 °C.
STEP 2: Before starting the mixing process, the separator between resin and hardener has to be removed. The sealed mixing bag makes contact with the two components impossible.
STEP 3: During the mixing process, both components must be mixed until one homogenous mass as best as possible. The times specified in the processing instructions, 3 minutes, must be complied with.
STEPS 4+5: It is not enough to simply sway or shake the bag. To prevent cast resin losses as much as possible, it is recommended to spread the cast resin from the corners and roll up the empty end.
STEPS 6+7: Afterwards, one corner of the bag can be cut open to pour the cast resin into the joint. Below is an image of the assembly instructions with the separate steps: 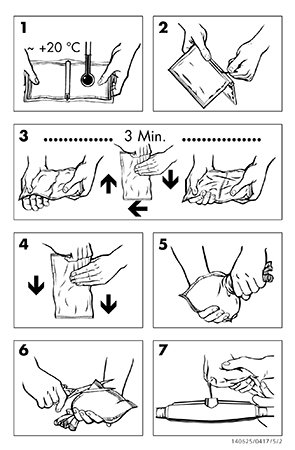 How long does the cast resin have to be mixed for?

During the kneading process, the resin and hardener are mixed and start an exothermic chemical reaction. The assembly instructions provided show a bag mixing time of 3 minutes. If the mixing time is shorter, the components are not sufficiently mixed. Contrary to popular opinion, the cast resin does not “dry”; if the reaction cannot occur, the mix will not harden. The electrically and mechanically required properties are not met in this case.

How long does the EG cast resin take to harden at an ambient temperature of 15 °C?

The hardening time of the liquid EG cast resin depends on the ambient temperature, component temperature and cast resin volume. The following diagramme contains more information on this topic:

To which extent do cast resin joints protect against the penetration of gases?

Test standard DIN EN 50393 does not contain any test of the entire system for the impact of gases.

Changes in the properties depending on the substance and concentration are also not tested.

To which extent do cast resin joints protect against the penetration of water?

If assembled correctly in accordance with the specifications in the assembly instructions, the cast resin systems are protected against water penetration up to 1m depth.

What is important to consider in connection with cast resin and rain / moisture?

Polyurethane (PUR) cast resins consist of two components, one resin and one hardening component. Elements of the hardening component react more easily with water than with the PUR resin component. The mixture foams on contact with moisture. The electrically and mechanically required properties are not met in this case. Special cast resin systems, such as the UWR cast resin, are available when working in humid conditions.

What is the advantage of BBC Cellpack cast resin joints?

Our cast resin systems have been tried and tested over decades. The electrical and mechanical properties after hardening create a permanent and reliable cable connection. We provide a wide range of cast resins for multiple application areas.

What is the difference between hardening time and pot life?

The hardening time describes the time required for hardening 100% with the mechanical properties of components A and B. The pot life is a standardised term which colloquially is defined as processing period. Reactions may be quick or slow, depending on different temperatures.

UG: Meets tougher fire protection requirements and is used in the mining industry.

UWR: Is water-resistant and makes it possible to cast whilst exposed to moisture.

CG: Environmentally friendly removable cold casting mass made on a hydrocarbon basis. CG is free from silicones and isocyanates and has no hazardous substances label.